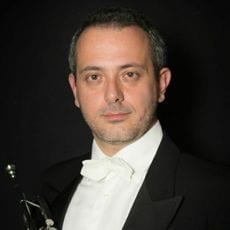 Emanuele is now Principal Trumpet with the Camerata Strumentale Città di Prato and is the founder of the European Trumpet Academy in Alessandria (Italy), a project in collaboration with Yamaha.

He is specialised in trumpet embouchure problem solving and his help is sought by many trumpet players, both students and professionals.

Emanuele has appeared in a number of RAI, BBC and ARD broadcasts and has played in the world's most prestigious concert halls with some great conductors including Riccardo Muti, Lorin Maazel, Claudio Abbado, Zubin Mehta, Wolfgang Sawallisch, Giuseppe Sinopoli, Georges Prêtre,

Emanuele’s trumpet playing has been influenced by a number of other teachers including Bo Nilsson, Gabriele Cassone, Pierre Gillet and Stephen Burns.

Emanuele was recently awarded the “Golden Bridge” by his hometown Pontelambro, as one of its most distinguished residents.

To find out more about the European Trumpet Academy visit