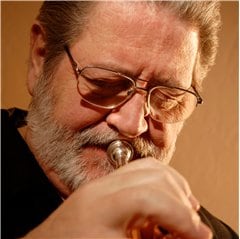 He spent most of his high school days playing as many as six nights a week in a dinner club, giving him an early start to his professional career.

He then spent three years as the jazz trumpet soloist in the famed NORAD multi-service band. Shortly after leaving he joined the Tommy Dorsey Orchestra under the direction of Sam Donahue, which, among other things, gave him the chance to perform quite a bit with trumpet legend Charlie Shavers. After his stint with Tommy Dorsey, Bobby was asked to play with Woody Herman's band upon Bill Chase's recommendation. He then spent some time playing for Della Reese and Buddy Rich, who's big band had just been formed.

By this time Bobby was widely known for his strong lead playing rather than as a jazz soloist. So late in 1972 he decided to make a move to the Los Angeles area in order to get reinvolved in developing as a jazz player. Once in Los Angeles, Bobby quickly found what he was looking for, and in the years to come he spent time with the groups of Art Pepper, Bud Shank, Horace Silver Quintet, and Frank Strazzer-Sam Moss, as well as numerous big bands such as Bill Holman, Louie Bellson, Toshiko Akiyoshi-Lew Tabackin, Oliver Nelson, Bill Berry, Nat Pierce-Frank Capp Juggernaut, Ed Shaughnessy, Terry Gibbs, Benny Goodman, Maynard Ferguson, Neal Hefti, Don Menza, and Bob Florence. In addition to being a sideman Bobby also became a leader around this time, recording many of his own albums. Several of these received very high accolades from critics and high placement on the airplay charts. One of his albums, 'Outstanding In His Field' was nominated for a Grammy in 1980, while, 'Heavy Company' was awarded the Jazz Album Of The Year in 1983.

Today, in addition to a busy performing and private teaching schedule, Bobby spends a considerable amount of time actively involved in the educational system, conducting clinics and master classes at high schools and college campuses all over the world. Bobby has also been active on the Board of Directors of the International Trumpet Guild, and has acted as National Trumpet Chairman for the International Association of Jazz Educator's for 16 years.

Bobby has endorsed Yamaha equipment for years and the fact that they have recently been using him for advertisements is further indication of his popularity.