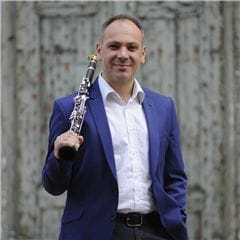 Ognjen Popovic (1977) is a prominent clarinet player from Pančevo/ Serbia. In 2001 he finished his studies at the ,,Hochschule für Musik und Theater" in Munich as a student of prof. Ulf Rodenhäuser.

He has been awarded with several prizes at competitions, including Jeunesse Musicales in Belgrade in 1997 and the Felix Mendelssohn competition in Berlin in 1998. In 2002 Ognjen Popovic was appointed solo clarinetist of the Belgrade Philharmonic Orchestra. He is the leader of the Balkan Chamber Academy ensemble and artistic director of the chamber music festival "Classic fest" in Pančevo. Since 2012 he teaches at the Belgrade Music Academy as a clarinet docent. In the same year he received his PhD in music art. He also gives master classes in Serbia, Germany, Spain, Montenegro. His works for clarinet have been published by Edition-Diewa from Munich.